Aug 1–4, 2017 | Nothing, not even hot weather, could prevent us from having a wonderful time in the Hungarian capital. 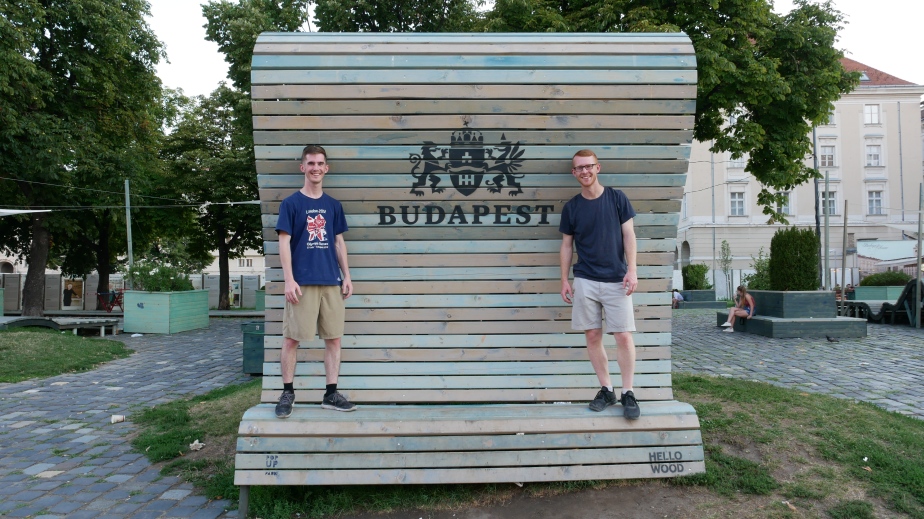 Upon arriving in Budapest, we made our way down to the subway and purchased a one-way ticket to get to our Airbnb apartment. We had no idea, but apparently Budapest has one of the oldest subway systems in the world! It first opened in 1896. Wow. We checked into our apartment and then began walking around town.

For dinner that first night we stumbled upon a really cool food truck market with tables and chairs. It was tucked away in this mini park in an alleyway, and there were good vibes all around so we went in and each got a burger (Zach’s was standard beef, mine was a vegan burger!).

Feeling full, we then scoped out some of the sights on our side of town including St. Martin’s Cathedral, the Danube River, and the Hungarian Parliament building, which is awesome! 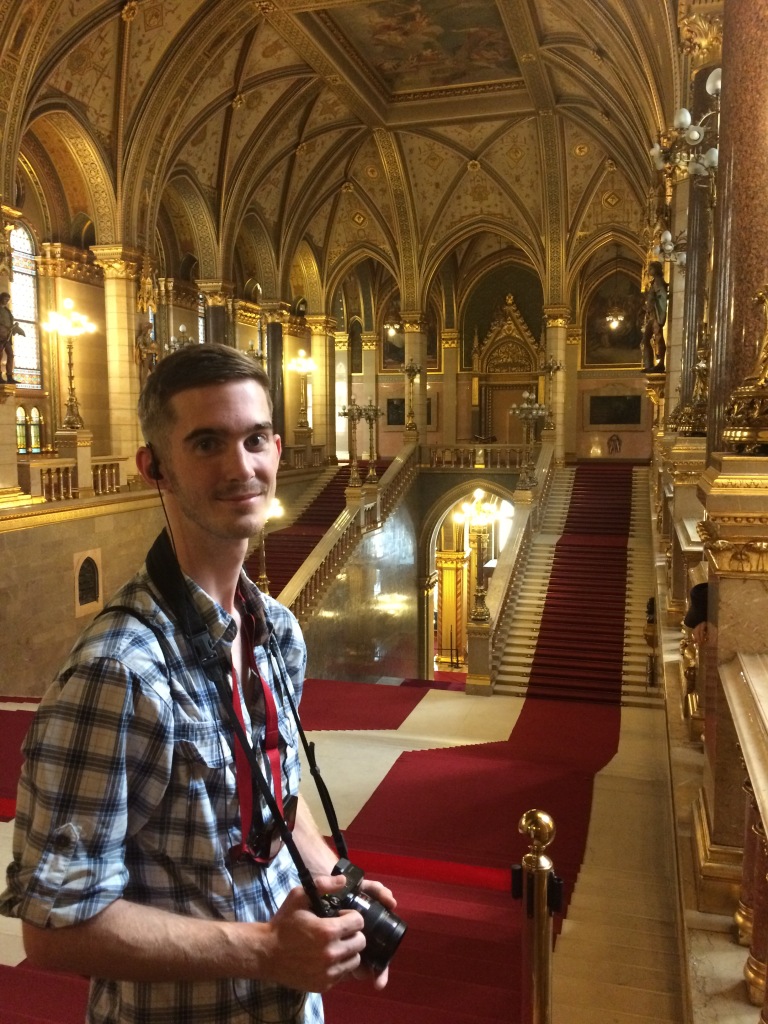 On our first morning we toured the inside of the Parliament building and then ate a huge Hungarian lunch. Amazing flavor, way too much food…

We kept walking around town to burn off some of the food and made our way to a “ruin bar” called Grandio and then a rooftop restaurant just in time to catch the end of the sunset. Great way to end the day. 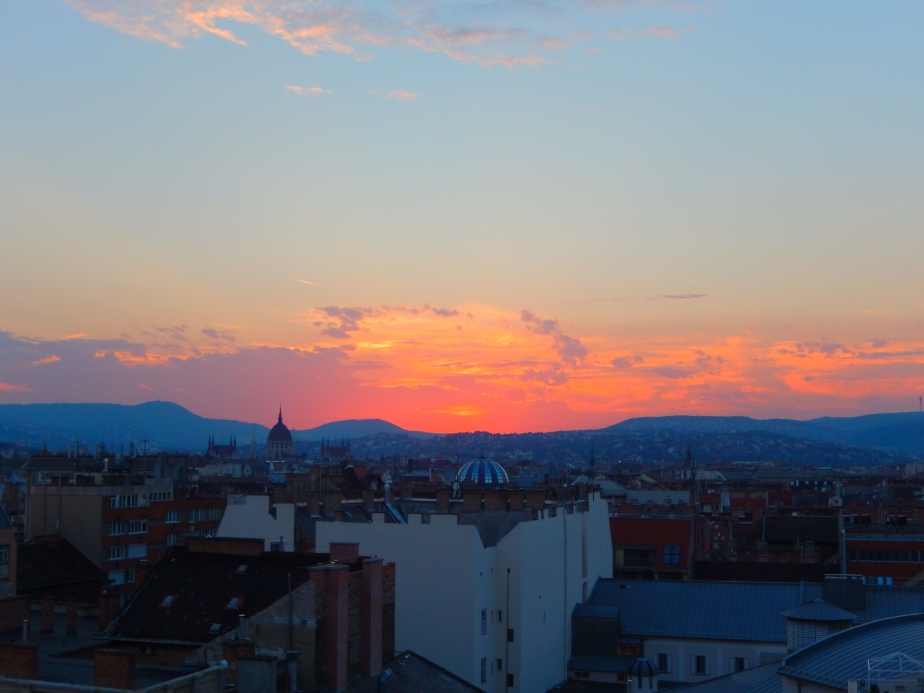 During our last day in Budapest, we went to the other side of the river to visit Gellert Spa, a facility with nearly 10 thermal pools and an outdoor wave pool. Since we were swimming most of the time, we don’t have pics, but the complex was really cool and it was well worth the price of admission.

We stayed on the western (Buda) side of the river (Buda and Pest used to be separate cities, but now they’re one!) for the rest of the day to ascend two separate hills. First, we climbed many stairs to go up Gellert Hill and visit the Liberty Statue. Of course, Zach had a brilliant idea and suggested I do my best statue imitation. 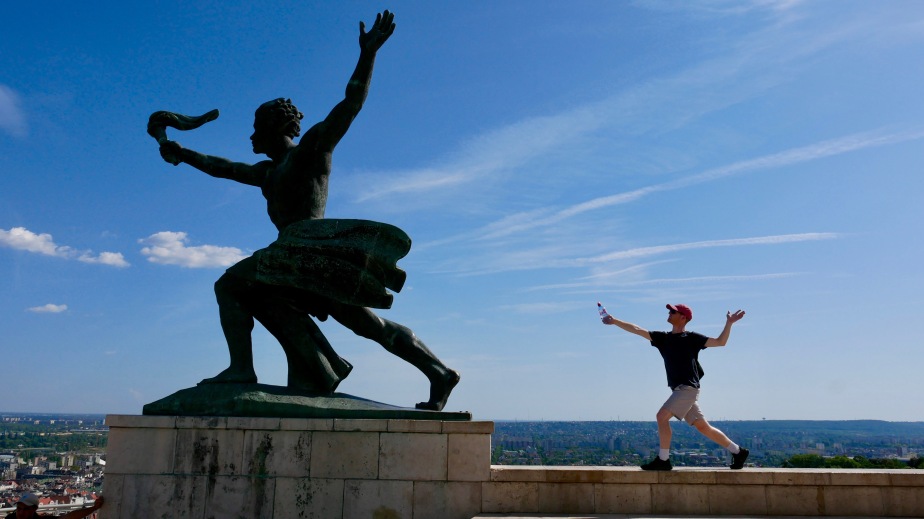 After briefly refreshing with some water at a café, we then climbed Castle Hill to walk around the castle, St. Matthias Church, and Fisherman’s Bastion.

Our stay in Budapest was delightful, and the following morning we headed to the airport to catch a flight to Switzerland. 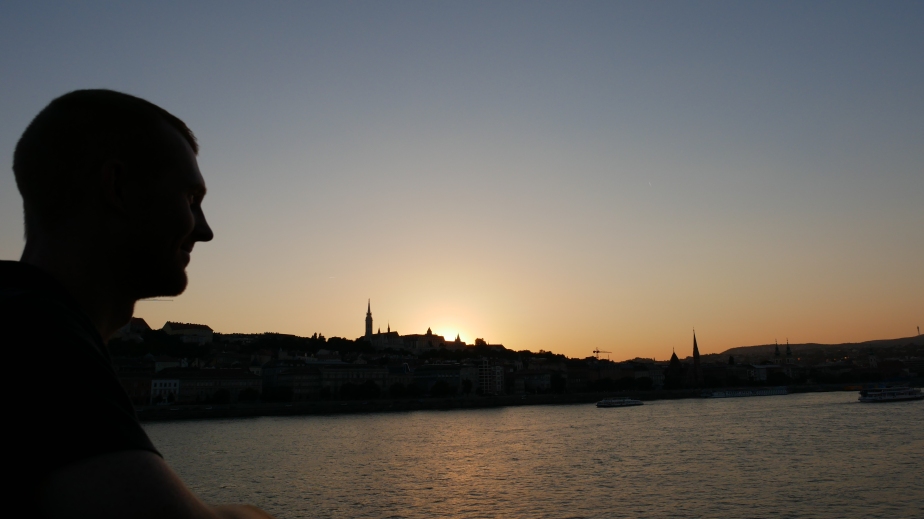